We all need an escape from time to time. And sometimes all we need is a really good laugh. The kind of laugh that leaves you gasping for air, slapping whatever surface is near you, and thinking of one-liners for days.

Now, of course, this “best kind of laugh” is often attached to a joke or funny scenario that you identify with. That’s why some people find certain things funny while others don’t.

For me, my new “go to laugh generator” is the YouTube short film series “Pittsburgh Dad” which is one of those things that I identify so much with that it is simply hysterical.

I grew up less than a mile from the Ohio-Pennsylvania state line, my Mum is from Pennsylvania, most of my family lives there, and PA has really helped define me more than my home state of Ohio has. I root for the Steelers, not the Browns, and I would pick the forested beauty of the Alleghenies over the flat expanses of Ohio any day.

Because I’ve straddled the Ohio-PA border for my entire life and because Eastern Ohio and Western Pennsylvania culture and customs aren’t really that different (remember my cookie table explanation?), so many of the themes, anecdotes, jokes, and countless other nuances that appear in episodes of Pittsburgh Dad are immediately recognizable to me.

Since its debut in October 2011, Pittsburgh Dad has become something of an internet sensation, particularly in the Pittsburgh area. An ever-growing series of of 1-3 minute short films, Pittsburgh Dad is the creation of Pittsburgh-area natives Chris Preksta and Curt Wooten. The character is an exaggeration of Wooten’s own father and talks and complains about typical Dad stuff in a thick Pittsburghese accent. (For more information on Pittsburghese, check out this website.)

The premise of Pittsburgh Dad is simple. Preksta directs while Wooten stars as the title character — the only character to ever appear on camera. There are other characters, but they always remain off-screen. 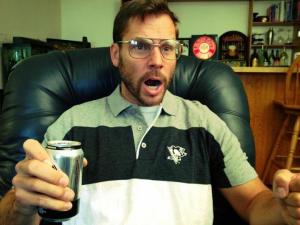 Pittsburgh Dad appeals to me mostly because of my regional connection to it and my understanding of the Pittsburghese dialect in which the character talks. While I don’t use all the vocabulary or pronunciations that Pittsburgh Dad does, I do use/understand a lot of his words. For example, I call my mother Mum, not Mom. Water comes out of a spicket, not a faucet. You need to wear Tennies (tennis shoes/sneakers) into the woods or weeds so you don’t get pricked by a jagger bush (thorn bush).

But, you don’t have to be a Pittsburgh-area native to understand or enjoy Pittsburgh Dad. The Pittsburgh jokes aside, Pittsburgh Dad is just a funny reflection of real life — of the behavior that we all exhibit, about things we did as kids and things our parents did too.

You just have to watch to see….

Pittsburgh Dad premieres new episodes on YouTube every Tuesday. Currently, there are over 60 videos to watch including dozens of original episodes, outtakes and deleted scenes, and behind the scenes discussions.

Here are some of my many, many favorites:

“Dad Yelling on the Answering Machine”

Disclaimer: Pittsburgh Dad is exclusively the property of Chris Preksta and Curt Wooten.