Never have I ever cheered for Ohio State. Now, before I get the blog-equivalent of carried out on a rail, let me explain…

Head Coach Urban Meyer after the OSU vs. Cal game.

The Ohio State University just ended a perfect football season, going 12-0 this fall. I think that’s fantastic, and I’m happy for any university or college that can claim that sort of streak. It truly says something about the strength of the team and the wisdom of the coaches. Unfortunately, for the 2012 Buckeyes, this past weekend’s game against arch rivals, the University of Michigan Wolverines, brought the end of their undefeated season. During the 2010 and 2011 football seasons, while the team was under Head Coach Jim Tressel (the coach who led my alma mater, YSU, to 4 NCAA Division I-AA titles in the 1990s), several players were found to have traded tattoos for autographs or selling memorabilia, violating NCAA policies. The fallout from these and other scandals led to Coach Tressel retiring from football, wishing to remain a “Buckeye for life.” Urban Meyer was named as the new head coach for the team, but his first season at the helm would not include postseason activities due to the sanctions set in place by the NCAA. 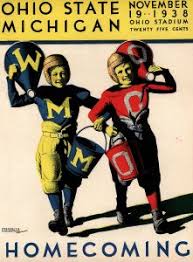 This is ridiculously tame and the exact opposite of anything involving those two teams today.

A lot of people are quite angry that despite their perfect record this season, Ohio State will not be headed to any bowl games, including one where it was likely that they’d be matched up against the Notre Dame Fightin’ Irish. Fans of the team, who are flung to all corners of these United States, attempted to petition the White House, seeking a pardon for the team and allowing them to participate in postseason games. This petition, however, was removed. (I would petition to have “Whose Line Is It Anyway?” brought back, but I think the President has bigger things on his plate.)

Welcome to ‘Whose Line Is It Anyway?’, the show where everything’s made up and the points don’t matter. That’s right, the points are just like Angelina Jolie’s breakfast.

Getting back to why I can’t bring myself to root for the scarlet and gray… I just don’t have a reason to. I don’t have a personal connection to the university, so I guess I don’t understand fervently cheering for a school I’ve never attended. It doesn’t mean anything to me, really. Going by that standard, a lot of universities hold no meaning for me. You know who I will always cheer for? The Youngstown State Penguins. Since I called it home for six years, I always will. Even if they’re not not in the playoffs, they’re still my team. I’ll probably be a big fan of the football program of whatever university or college I get to work for in the future, too. (I will try to get excited about basketball and baseball, but that’s asking a lot.) If you didn’t have a personal connection to Youngstown State, I wouldn’t expect you to root for them. OSU has fans all over the country, if not all over the world, so I understand the “pride is nation-wide” thing. As a fan of the Pittsburgh Steelers, I’m part of a similar nation, but more about that in a minute. However, my friends who are alumni of Ohio State can take comfort in the fact that I don’t cheer for the Wolverines, either.

Alright, so I’m not a fan of Ohio State because I didn’t go there. Ok. What about the fact that they’re from Ohio? Eh… that doesn’t hold much for me, either. It’s not like they’re the only good university football program in the state — look at Cincinnati. This goes for my NFL allegiance, too. Just because I’m from Ohio, it doesn’t mean that you’ll ever catch me in orange on game day, for either the Bengals or the Browns. (Actually, never the Browns.) I live closer to Pittsburgh than I do Cleveland, and I guess you could say I’m Pittsburgh Steeler-born-and-bred. I can admit that we’re very likely not going to the Super Bowl this year, but no one can ever call me a bandwagon fan.

These guys know what’s up.

So there it is. It really isn’t personal, Ohio State. I have plenty of friends who have attended and loved their experiences at Ohio State and that’s great for them. I appreciate the strong traditions of the school, including the annual “baptism” in Mirror Lake and Script Ohio. But, I didn’t go there, so I just don’t have that connection. At the same time, I don’t actively root against them, or any team… unless they’re playing against YSU. They’re a good team, and if they have a lot of players returning next season, I don’t see why they can’t make it to the bowls next year. Coming off the postseason ban, I’m sure they’ll have the drive to do so. Besides, I know several other people who cheer for universities they never attended, including Duke, Alabama, WVU, and, yes, even Michigan.

Now I’m curious, and there’s no right or wrong answer. If you’re an Ohio State fan, did you go there? If you didn’t, what about the Buckeyes makes you cheer for them? Or, do you root for another school that you didn’t attend? Why? These are just my reasons, and I’d like to hear yours. Just keep it civil. 🙂

Known for its extremely supportive Cleveland sports fans and…well, that’s all I can think of.

Be honest. When you think of the 50 states that make up this great country, what states come to mind as those that stand out for their beauty, reputation, or life of luxury? When planning your honeymoon in the United States, do you dream of going somewhere warm with sand and a beach such as Florida or California, or do you think of going to a place where the weather is so unpredictable that you can experience at least 3 of the 4 seasons in one day as in Ohio? Planning an extended weekend trip-would you rather go to NYC and see all the wonderful attractions it has to offer, or travel to Ohio to visit…?

You get the point.

When people think of the United States, I highly doubt that many of them think of Ohio as being extremely notable for a whole lot. In fact, many people who I know who live here sport bumper stickers on their cars, similar to this:

It’s sad to think that even people who live here have many complaints about being here. Don’t get me wrong, there are certainly times in which I wish lived somewhere in which the weather was a little less unpredictable and where I consistently had a winning sports team to cheer for (I’m kidding here-I’m a Cavs fan through and through, with or without LeBron). Despite my whininess (yes, I did make  up that word) about the weather and the complaints of my fellow Ohioans, I think we may need to reconsider the importance of this state in the grand scheme of things. So do presidential candidates.

Before discussing that, I’d like to point out some really awesome things about this state (which may reiterate some of Abbie’s previous post):

‘Ides of March’ starring George Clooney and Ryan Gosling was filmed (at least partially) in Ohio!

Parts of the new ‘Avengers’ movie was also filmed in Ohio! (The street scenes are in downtown Cleveland!)

Speaking of Cleveland, it is home to the Rock and Roll Hall of Fame, visited by thousands of music lovers and Rock fans alike, not to mention their many inductees (Prince, Bob Seger, George Harrison, Miles Davis, Madonna…and the list continues). We have the Buckeyes, the Browns, and the Cleveland Clinic (couldn’t think of another B there).

Enough about that already. As we all know, this is a very important year in terms of politics. Within the next few months, we will be choosing the person who will lead our country for the next four years. Will Americans choose to reelect our current democratic president, Barack Obama? Or, will our citizens decide they want a fresh face in office and support a republican candidate such as Mitt Romney or Rick Santorum? Regardless of who you support (frankly, I don’t care as long as you are an informed voter), Ohio will play an important role in this upcoming election.

If you doubt my accuracy in these statements, just look it up. Oh, and if you think, ‘So what, the candidates don’t really care about Ohio’s 18 electoral votes…” Guess again.

In the last presidential election, I was impressed at how many political representatives came to both Ohio, and specifically my community. During the course of the election period, we were lucky enough to: have Barack Obama speak to our community at least twice (including as a visitor to our university where I worked the event-as did at least 1 of the other dames), host Hillary Clinton at an event (which I also worked), have Joe Biden visit, and have Good Morning American filmed in our community where John McCain was a guest (…gotta love getting up at 4:30 am to see these politicians). Furthermore, former speaker of the house Nancy Pelosi also hosted an event in our community (I have pictures), as did former senator Ted Kennedy. The crazy thing about all this is that this was all in my community and does not even account for the many visits that these individuals made throughout this great state during those crucial election months.

My favorite event that we hosted has to be Rock the Vote! When Rock the Vote came to our town, they brought Sheryl Crow, the Beastie Boys, AND  Ben Stiller (who looked like he had just walked off the set of ‘Meet the Parents’ I might add)!

Ohio’s primary is coming up in March and I expect things to get a little crazy here in the next few weeks. Even though I’m getting my graduate degree in psychology, I have a certain (hidden) love for politics. I guess I feel like I have to put my political science degree to use some how. I’m really looking forward to seeing who makes their way here and look forward to seeing as many candidates as possible (Republican or Democrat).

So…if you doubt this great state, think of this and all that it has to offer. Think of the role that we are going to play in November. Whether you vote for Obama or the Republican candidate, just remember that your vote does matter (sorry…didn’t mean to get preachy there).