Who doesn’t love a good quote? Sometimes it takes the words of others, famous or not, to sum up our thoughts and feelings when our words escape us. Or, maybe you read something that immediately clicks with you and it becomes sort of a “mission statement” for your life. (After six years in higher education, the thought of a personal mission statement makes me gag a little bit. We love the heck out of our mission statements, apparently.) But, the Internet is a tricky place, and without citations, words are often attributed to certain celebrities or notable figures. The misquote can come from an honest mistake, and after seeing a quote attributed to someone a multitude of times, I can understand that. However, when it comes to things that Marilyn Monroe, Audrey Hepburn, or Jackie Kennedy allegedly said, I become more than a little skeptical, and maybe just a touch cynical.

In my research for this post, I came across several Tumblrs and hundreds of pictures on Google Image Search with images of these women, Monroe in particular, with fiesty-sounding quotes superimposed over them in handwriting-style fonts. (Go ahead, look for yourself.) Most of them are about how men ought to love women, flaws and all, or how society is ugly for making a woman feel anything less than pretty. I’m on board with those ideas, but I highly doubt to absolutely don’t believe that the late icon uttered those quotes. I’m not saying that Marilyn Monroe was not bright enough to come up with such, um… philosophical thoughts; I’m saying that others who have done much more research on her, things she’s actually said/written, and speech patterns of her time don’t think she came up with them. The most comprehensive website I’ve come across debunking these attributions is Immortal Marilyn, which, while it looks like a Xanga page from 2000, is quite informative. “Janie’s Take on Marilyn Monroe” discusses five of the more questionable quotes the Internet alleges came from Monroe. Here are a couple of my favorite excerpts:

“I’m selfish, impatient and a little insecure. I make mistakes, I am out of control, and at times hard to handle. But if you can’t handle me at my worst, you sure as hell don’t deserve me at my best.” — This one seems to be everybody’s favorite Marilyn quote… except no one can find where she actually ever said it. Does it sound like her? Somewhat, although I can not find other examples of Marilyn referring to herself as selfish, insecure, out of control, or anything similar. While she did acknowledge issues such as her lateness, failure to show up on set, or rumored difficult to work with, rather than being defiant she offered both plaintive and valid reasons for her flaws, in the hopes of garnering understanding. Until an interview transcript of Marilyn saying these words can be located, it should be kept in the ‘questionable’ category.” 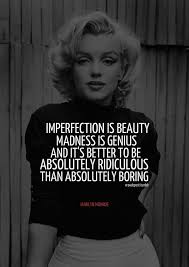 “Imperfection is beauty. Madness is genius, and it’s better to be absolutely ridiculous than absolutely boring.” — Another very popular quote, once it’s parsed it does not sound like Marilyn at all. “Imperfection is beauty”? Marilyn was well known as being an absolute perfectionist, asking for take after take on the movie set until she felt she got her scene just right. She refused to give moviegoers anything less than what she felt was her absolute best. She would apply her makeup only to wash it all off and do it over again, taking hours to prepare so that she presented herself to the public as nothing short of absolutely perfect. After a photo shoot she would pore over contact sheets, destroying any images that she didn’t approve of. In a 1960 interview, she did say: “My one desire is to do my best, the best that I can from the moment the camera starts until it stops. That moment I want to be perfect, as perfect as I can make it.” Hardly seems that someone so hard wired to perfectionism would say “Imperfection is beauty.” As to the second part, “Madness is genius,” this seems even more unlikely. Marilyn’s mother suffered from severe mental illness that traumatized the actress when she was a child. As an adult, Marilyn’s biggest fear was inherited madness like her mother’s. Considering her first hand account with what madness truly was, and her deep rooted fear of it, how likely is it that she would declare it ‘genius?’ Not very.

I tend to agree with those observations. To be frank, they sound more like snarky quips from a teenage girl, using Monroe as an excuse for her behavior. The whole idea of falsely attaching a name to a quote can be summed up in Poe’s Law, which basically states that ” a parody of something extreme can be mistaken for the real thing, and if a real thing sounds extreme enough, it can be mistaken for a parody.” A great example that most people would probably be familiar with is Stephen Colbert’s character on The Colbert Report, which some Political Science students at Ohio State decided would be an interesting subject to analyze. (Unfortunately, the full article is only available for purchase or if you’re logged on through a subscribing university or college’s journal access system, but the abstract will give you the general idea.) We can also learn from the case of the Notre Dame football player and the death of his online girlfriend, who may or may not have actually been a real person: never believe anything online. If those quotes resonate with you, that’s great, but its important to question the source; otherwise, it might as well have come from a snarky teenage girl.

If this keeps up, this is what I imagine we’ll have fifty years from now: